Entering the world of cheerleading is just as it sounds… you’re entering a whole new world!

There are many words that have completely different meanings when they are in the context of cheerleading. If you are guiding your child through the wonderful world of cheerleading, here are some terms which will be very helpful to understand.

A cartwheel or walkover without hands touching the ground or floor.

The athlete stands on one leg and lift the other behind, as high as they can. Mastering this move requires a lot of core strength and control, especially while up in a stunt.

Bases are the athletes that hold the flyer in the air during stunts and pyramids. They must be in direct contact with the performance surface at all times.

A stunt in which three or four bases toss a flyer into the air – two of the bases use their hands to interlock wrists.

The flyer grabs her foot with the opposite hand and pulls her leg up into a vertical split. The free arm is then stretched horizontally past the extended leg to create the arrow.

The beginning position – feet together, hands down by the side, fingers together with thumbs tucked in.

When the bases catch a flyer after tossing them in the air, the flyer lands in a hollow body position into the arms of the bases who support them by placing arms wrapped under the back and under the thighs.

The flyer stands with their foot or feet in the hands of their bases who’s arms are extended fully above their heads.

The flyer is the person that is in the air during a stunt. Flyers must stay tight throught the entire stunt and control their own weight by squeezing everything from their thighs to their shoulders.

When routine choreography is completed coaches will begin to say the two words that every athlete knows is coming – FULL OUT! In class, stunts, pyramids, jumps, tumbling and dance are focused on individually. In a full out, athletes put their entire routine together and focus on executing it with 100% energy.

A motion where both arms are extended up forming a V. Arms are straight up but out from the head by about 45 degrees.

Hitting a skill means an athlete has executed a skill with great technique. When a stunt hits it means the entire group has worked together to successfully execute the stunt. In jumps the word hit is shouted by teammates as each jump happens to assist with the timing of jumps.

Hitting Zero means that all stunts, tumbling, jumps, dance in the performance of a routine have been executed without any deductions from the judging panel. In other words “HIT ZERO” means ZERO deductions in a routine.

The flyer balances weight on one straight leg. The flyer’s other leg is bent with the foot positioned at the knee level. The name of this body position is often shortened to ‘Lib’.

An athlete who stays in contact with the performing surface whose primary responsibility is to prevent injuries by protecting the head, neck, back and shoulder areas of a flyer during a stunt, pyramid or toss.

A tumbling skill performed from a standing position without any previous forward momentum.

Where the flyer switches feet in a stunt.

A jump where the athlete brings both legs up to their outwardly extended hands (in a T-shape) and snaps their legs down with as much force as they came up with.

Ready to give cheerleading a go? Book your first trial lesson today. 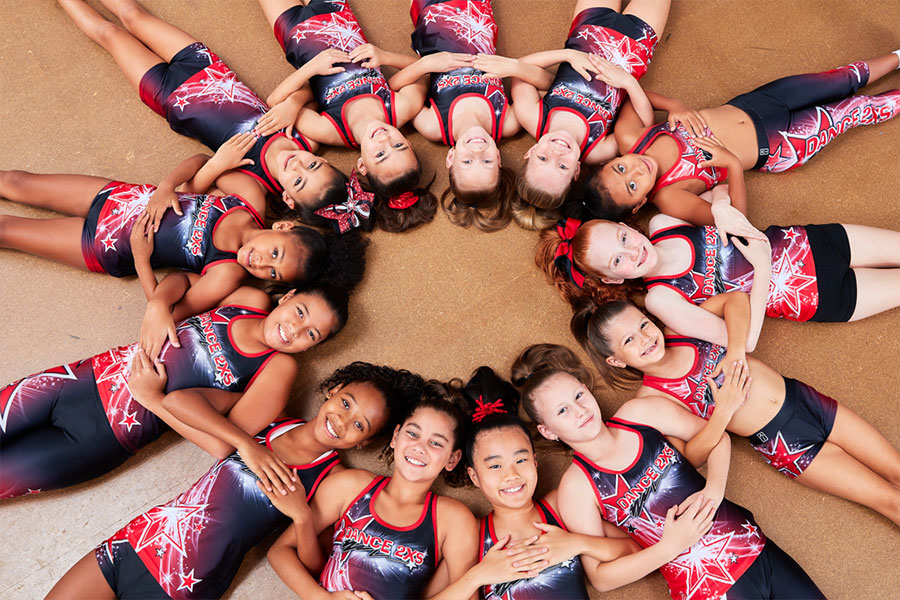 Values are not taught in the traditional sense. Children who learn strong…
Read More

Why Dance Cirque is the key to happy, healthy kids.

Circus is known for its many physical and mental health benefits. Now…
Read More

Cheerleading is the Best – Marina age 12

Join the Dance 2XS family and experience the magic of dance, tumbling & cheerleading.

We offer a variety of classes for all ages and abilities to fit in with your schedule.